— part of the Researchers Shaping The Future Series —

It’s my great pleasure to introduce… 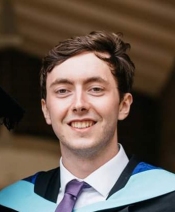 Electronic Engineering PhD Student working on the physics behind a new generation of solar cells in between kayaking, climbing and generally being outdoors.

Building a better theoretical groundwork for the next generation of renewable energy: Perovskite solar cells.

Elaine…  When we were talking about your research at the recent Doctoral College event it was apparent that it really matters to you.  Please could you share why doing research in this area is important to you personally.

Cameron…  Climate change is the problem of our current generation with a massive energy transition from fossil fuels to renewable energy being a small but vital piece of the worldwide solution required.

This is a very important topic to me personally as it will affect every one of us within our lifetimes in one way or another.  It is such an important issue that I feel almost an obligation to work on it or at least spread it throughout media.

With more work and more worldwide attention, this very promising field could play a very great part in the near future of humanity, helping people worldwide, ideally and importantly, from every variety of country, regardless of wealth.

Elaine…  Moving from the personal to the bigger picture.  What difference do you believe your research could make and to whom.  In other words, why does your research matter?

Cameron…  My research is a small part of a large effort to provide renewable solar energy harvesting for a much cheaper cost than currently available.

Current silicon solar cell technology, while efficient and robust, costs a very large amount during manufacturing as the cells must be heated up to over 1000°C as well as cost large amounts to transport as they are relatively heavy.  This means that getting solar cells to the less wealthy areas of the world (which also tend to be the areas with most sunlight!) becomes more of a challenge.

Perovskite solar cells on the other hand, whilst not yet established, pose comparable efficiencies with significantly cheaper manufacturing and transport costs.  Ideally, once settled, this could provide the world with the energy source which can commercially compete with current fossil fuel technology before the switch is forced on us due to the world’s lack of resources.

Header image by InspiredImages on Pixabay

This site uses Akismet to reduce spam. Learn how your comment data is processed.